February 6th was a big day. We moved Micah into Greyson's room officially at a little over 3 months and we moved Greyson to the big boy bed AND took away the pacifier. Like I said...it was a BIG day. Micah had been napping in the crib during the day and had had a few nights in the room with Grey but mostly was still in the pack n play in the guest room. Greyson had been going without his pacifier with the exception of naps for a little while but I just felt like we should "rip the band aid off" all at once, you know? I'm not going to lie...it was a tad anxiety inducing but I told Tim we'd likely have a bit of a "hell week" and then everyone would adjust. It was time to buckle down! 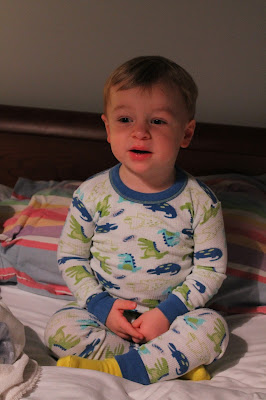 The pacifier and the big boy bed were a total non-issue. Micah being in the room with Grey was a bit touch and go for a while. They definitely woke each other up on and off but I was determined to make the room sharing a success so we tried our hardest not to go in for anything (except I still night nursed as needed). 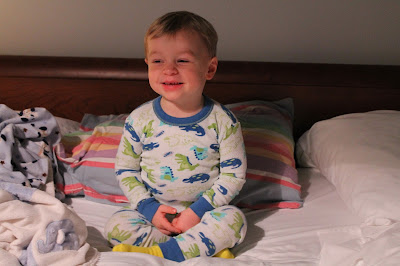 Now, this far removed from it I can tell you it's been a total success. I'm so glad we put them in there together. They chatter to each other as they are falling asleep and they sleep through each others random wakings for the most part. 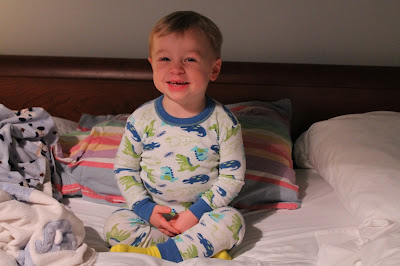 ^He really was starting to get a  bird beak...it was definitely time to take the paci.
He looked so tiny in that big ole bed. 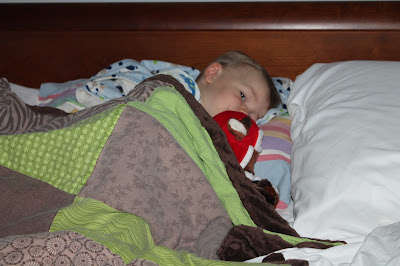 Also in February, Micah turned 4 months old. I didn't get as many great pictures as I'd hoped but I did get some cute close ups and funny expressions. 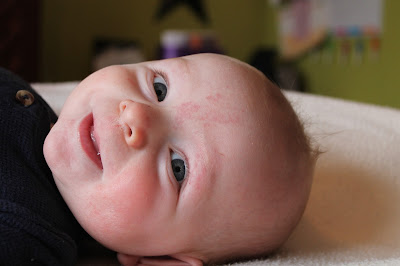 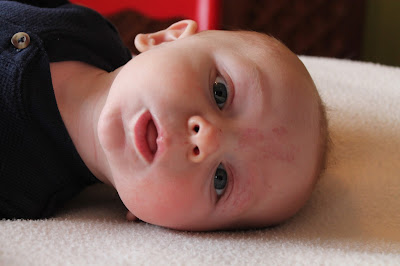 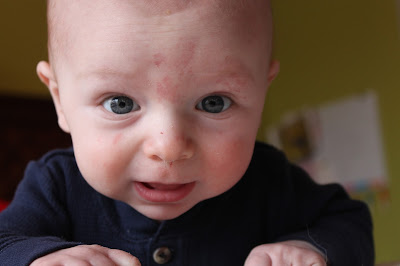 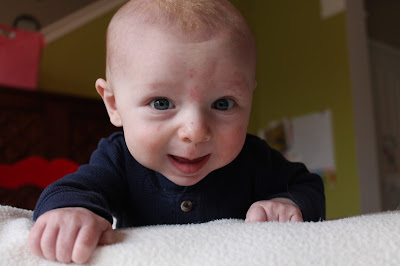 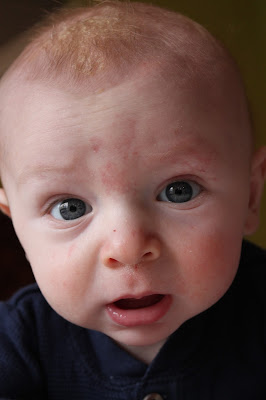 Love those big baby blues. Even with a puckered lip. 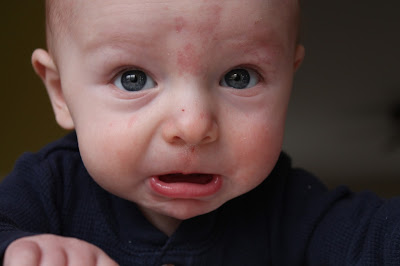 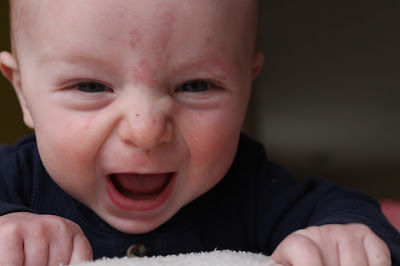 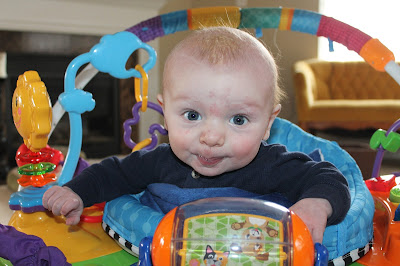 Now that we've had a glance back...let's have a relatively current peek at the going's on.

First of all, before we do that though - I've got to share something that I'm so super excited about. My birthday is tomorrow and I told Tim that what I really wanted most for any special occasion in the near future was for my blog to be printed. I want to hold what I've created for so many years now. Life has been so busy that my scrap booking has totally ceased. Creating photo books, though so much fun is so time consuming that I've also failed to do that. I never even finished Avery's baby books. Aside from the random group printing for home frame updating, I have no physical form of all the pictures I take and all the memories I try to record. After much research (he is an engineer after all) we decided to go with a company called blogtoprint. Printing the books ended up running around $75/year but I think we had a coupon from somewhere that he found. Because that's an investment, we only ordered my first two years but y'all - I'm so excited I can't even tell you. Like, BEST GIFT EVER excited. I can't wait to hold those books in my hand and sit down with a big cup of coffee and just stroll down memory lane and thank God for all the ways He's blessed us. Ahhhh...So: I'd love to hear from y'all. Anyone else out there printed their blog and what site did you use? Did you like it, not like it? Spill! I'll give my my opinion of it all once I get it in the mail. The uploading part was a piece of cake though. There aren't tons of custom options, but I'm okay with that...

Okay, so we left off in November around Thanksgiving. Picking back up...while we were all home for a few days we decided to go ahead and deck the halls. I have these ambitious dreams of us driving up to the NC mountains and picking our perfect tree and chopping it down together before loading it up on the van and driving it back home with our cups of hot chocolate and a gentle snow in the air. Ha! Sounds amazing, right? Well, I'm a bit of a realist and I fully know that going to the NC mountains with these four yahoos would be anything like the desired experience I just described above. So: we bought a tree at Walmart and called it a day. One day though - we are going to go have our perfect Christmas tree experience. Mark my words! 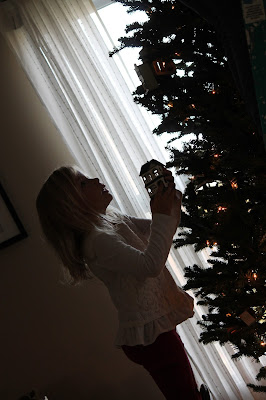 The tree we got was a good one, the process of decorating it...not so good. It was next level crazy. I'm just keepin' it real. There were ornament boxes tossed everywhere, the plastic and paper that neatly encircled each ornament was thrown about haphazardly, kids were trying to climb the ladder, ornaments were being dropped and when they weren't they were all being hung in clumps rather than spread about uniformly throughout the tree, kids were stepping on the light strands...it was complete and utter craziness. I honestly felt like I needed a drink and it was all going down before 10 AM. True story. 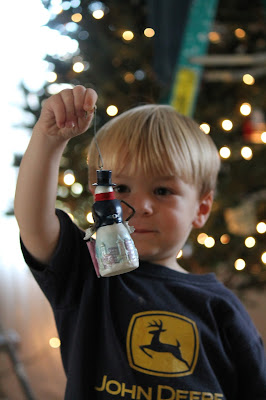 They looks sweet and precious and angelic in these pictures but they were tree decorating terrors. Seriously! 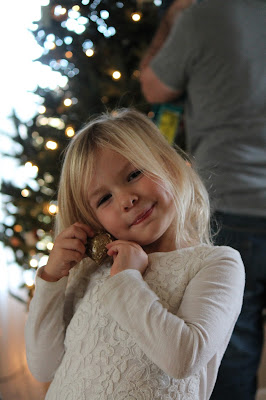 We had Christmas music playing and Christmas Spirit essential oil diffusing but Momma wasn't feeling it. 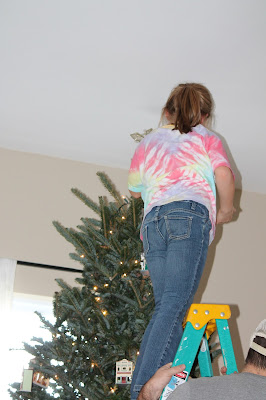 At one point I was yelling and sweating and thinking "well, this isn't at all what I had in mind". I had to time-out the decorating for a clean up break and then we had to have an ornament hanging talk with the children and then we resumed. 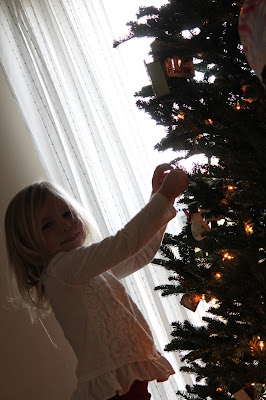 It's embarrassing to admit that I'm so type A but if I'm honest I also feel like you gotta know who you are and know your limits, else the "crazy Mom" comes out and I mean, that's just not good for anyone. It's like they say "If Momma ain't happy......" 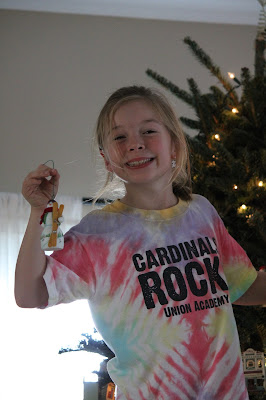 In the end, the tree got decorated, the mess got cleaned up and we were able to look at our creation and be happy and anticipate the coming holiday and all it would bring. I promise! I did breathe a sigh of relief and enjoy the time with my people. Even my littlest of decorators. 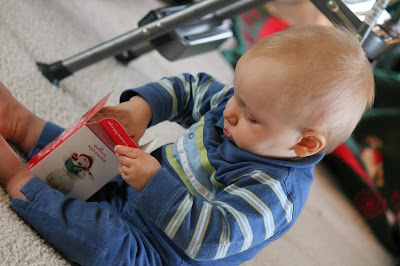 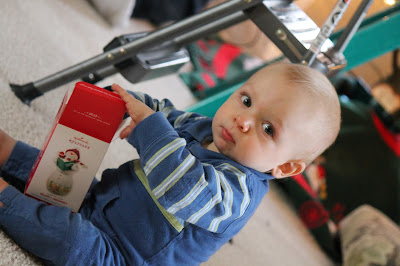